Overview: A challenging and rewarding hike to Arizona’s tallest peak. Set out early in July and August to avoid dangerous thunderstorms that could come with little or no warning.

My wife and I rolled into Flagstaff on a beautiful Saturday afternoon in July. The plan: hit up Mother Road Brewing and waste away the afternoon sipping on IPAs before heading up Snowbowl Road to camp out at higher elevation and get somewhat acclimated to hike at higher altitudes. Hopefully, we’d make it to the summit of Humphreys Peak, the tallest point in Arizona, the following morning.

After a few hours hanging out in Flagstaff, we headed out toward Snowbowl Road to find a camping spot. We took the first forest road on the right along Snowbowl road and found a decent spot. The dispersed camping in the area is free, but you can’t have a fire for much of the year.

Who needs a fire when you’ve got some of the best stargazing Arizona has to offer?

The sun was down by the time we finished setting up camp. I settled into my camp chair to face the San Francisco Peaks. For a couple hours, the lightning strikes we almost constant on the mountain and I thought there would be a pretty serious chance we may have to turn back during our hike the following day.

Waking Up and Hitting the Trail

We woke up and packed up camp just before 4:30 a.m. The goal was to be off the peak and below treeline before any afternoon storms could form.

After packing up driving up to the trailhead, we had breakfast and some tea before heading out. The day was perfect. The sun rose to reveal a perfectly blue sky without a storm cloud in site. I finally felt like I could start getting my hopes up.

The trail starts out by taking you across an open meadow. Once you hit the forest, it’s gradual switchbacks all the way up. The switchbacks get a little steeper as you near the saddle and the treeline.

For the first three-and-a-half miles or so you’ll be in pretty dense forest, with a few opportunities to catch a glimpse of the landscape below through openings in the trees.

It doesn’t take long to start feeling the effects of higher elevation, particularly if you’re a Phoenix dweller like me. The altitude makes it a little harder to catch your breath and it feels like your breathing becomes a little heavier.

However, if you’re in relatively good shape and hike frequently, you should do just fine.

The Saddle and the Scramble to the Peak 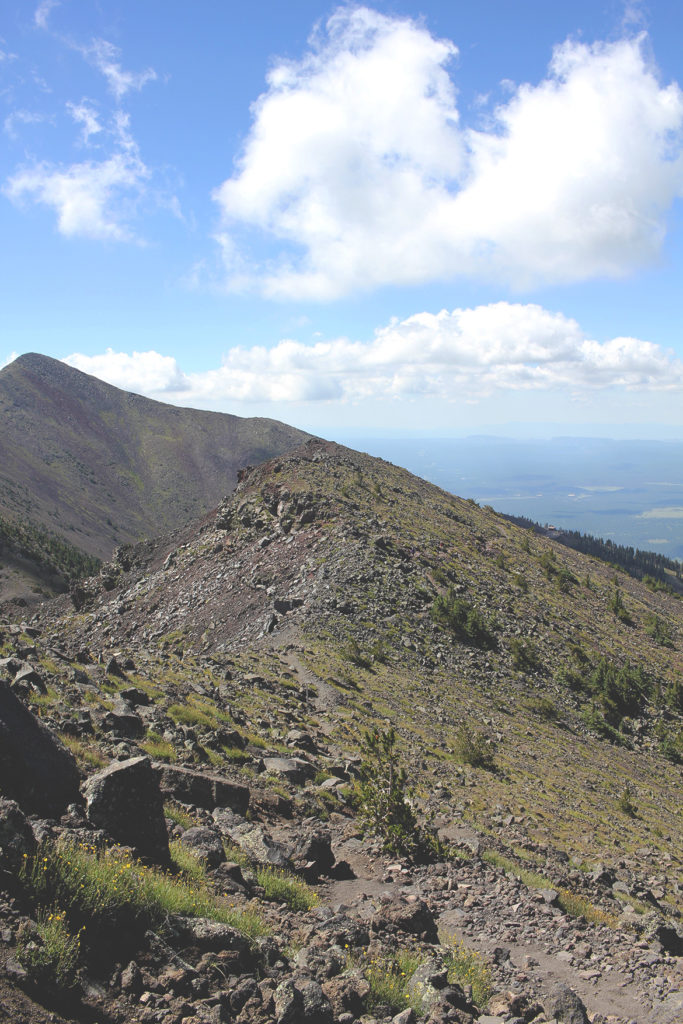 OK, I should say I took this picture on the way down. That is not Humphreys Peak in front of me. Humphreys is actually behind me. You’re looking at Agassiz Peak.

I was definitely feeling the elevation by the time we hit the saddle. Luckily, this is a great place to take a load off for a few minutes before making the final push to the summit. At this point, you are above treeline and the hard work so far is rewarded with expansive views of the surrounding peaks, ridgelines and the valleys far below.

Here’s a cool fact about the saddle. According to Arizona Highways, at this point, you are officially in Arizona’s only tundra region. Only Bristlecone pines and the San Francisco Peaks groundsel can survive at that elevation. In fact, that particular breed of groundsel doesn’t exist anywhere else on the planet. That means be cool, and stay on the trail to avoid trampling this beautiful and rare Arizona treasure.

After we had a bit of a rest on the saddle, we headed up for the final mile or so to the summit. The last leg of the trail is rocky with some light scrambling in a few areas. If you’ve done Camelback in Phoenix, you can definitely handle this type of scrambling.

You’ll cover three false summits before finally reaching the peak. The trail can be a little tough to spot at times. Be sure to look for the wooden poles that guide your way for the last leg of the journey.

The 360 views from the summit are outstanding. You’ll definitely get a feeling of accomplishment as you look out over the ridgeline and false summits you traversed to stand atop the highest mountain in Arizona. Don’t forget to snap a selfie next to the summit marker!

The photo next to the summit sign: mandatory, right?