Overview: A beautiful hike to a true Arizona treasure packed with history and lore. It’s a must-do for any Arizona backpacker.

Take a trip back in time to an abandoned ranch bearing the namesake of Elisha Marcus Reavis, a wily, bearded squatter who claimed the meadows and flowing stream as his own in the late 1800s.

While Reavis himself is one of the most intriguing figures of Superstition Wilderness history and lore, most of the remnants of the ranch that campers see today were actually built between 1909 and 1954. Superstitions historian Tom Kollenborn visited the ranch many times when it was still under private ownership and accessible via a treacherous, gut wrenching road that hugged cliffs and cut through the heart of the Superstitions.

He’s written an excellent account of his experiences along with some great history here.

Today, the road leading to the ranch is long gone. The land is only accessible by foot or on horseback. It’s one of the most popular destinations and a true treasure of the Superstition Wilderness. 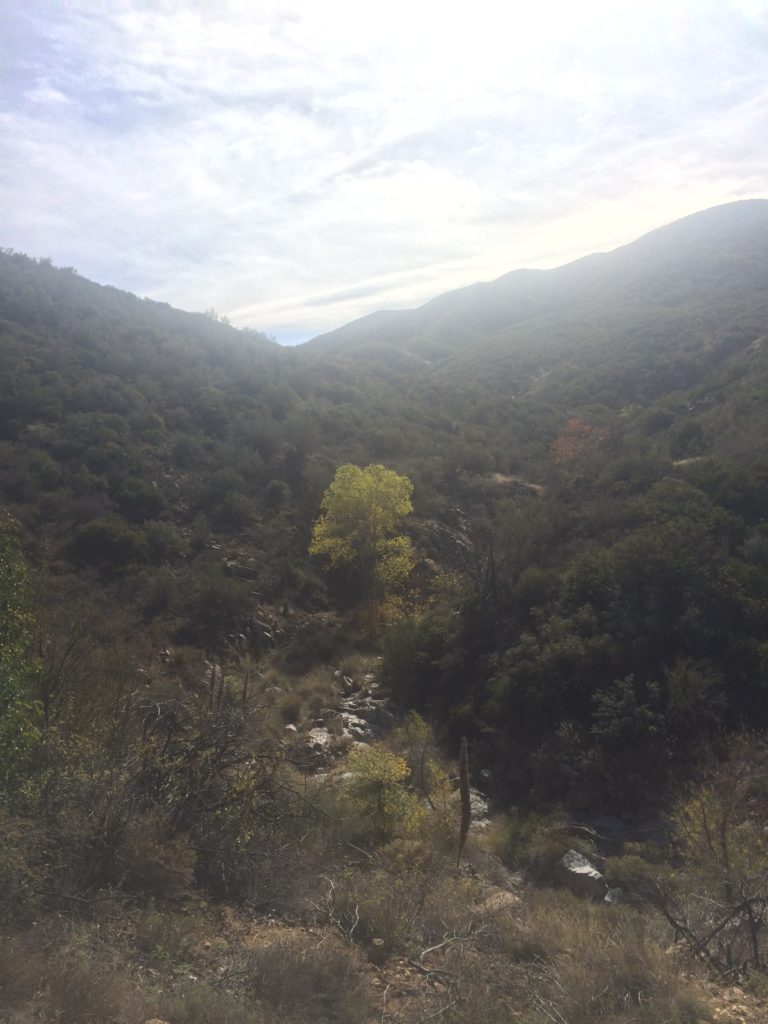 Great views along Trail # 109 from start to finish.

Hiking Out From Rogers Trough Trailhead

Heading to Reavis Ranch from this trailhead requires a four-wheel-drive or all-wheel drive vehicle. I saw a couple Subarus parked at the trailhead, so if you’ve got the skills, you can make it up without a jacked-up Four Runner, as long as you’ve got the stomach for a few cliffside hairpin turns.

The hike to the ranch is about seven miles from the trailhead. For the first couple miles, you’ll descend into a valley before switchbacks take you up and up some more.

This section of the hike offers some great views of the Superstitions, its jagged cliffs and striking rock formations. You may even catch a glimpse of some bighorn sheep. From the top of the switchbacks, the hike mellows out and it’s smooth and relatively flat walking to Reavis Ranch.

As you head down from the saddle with the switchbacks safely behind, you’ll be amazed by the change in vegetation. Junipers and pinon pines cast shade on both sides as you find yourself in forested terrain that crosses several perennial creeks. There are also some great campsites along the way, many of which would make a great place to camp for the night when the streams are flowing.

As you near the valley where Reavis Ranch lies, you’ll cross the only permanent spring-fed stream in the region and the only one that runs year round. This stream winds all the way through Reavis Ranch.

The ruins of Reavis Ranch are the centerpiece of a sprawling valley. There’s plenty of great camping at the site of the ranch itself and throughout the surrounding grasslands. Our group found a great spot about five minutes walk from the ranch. 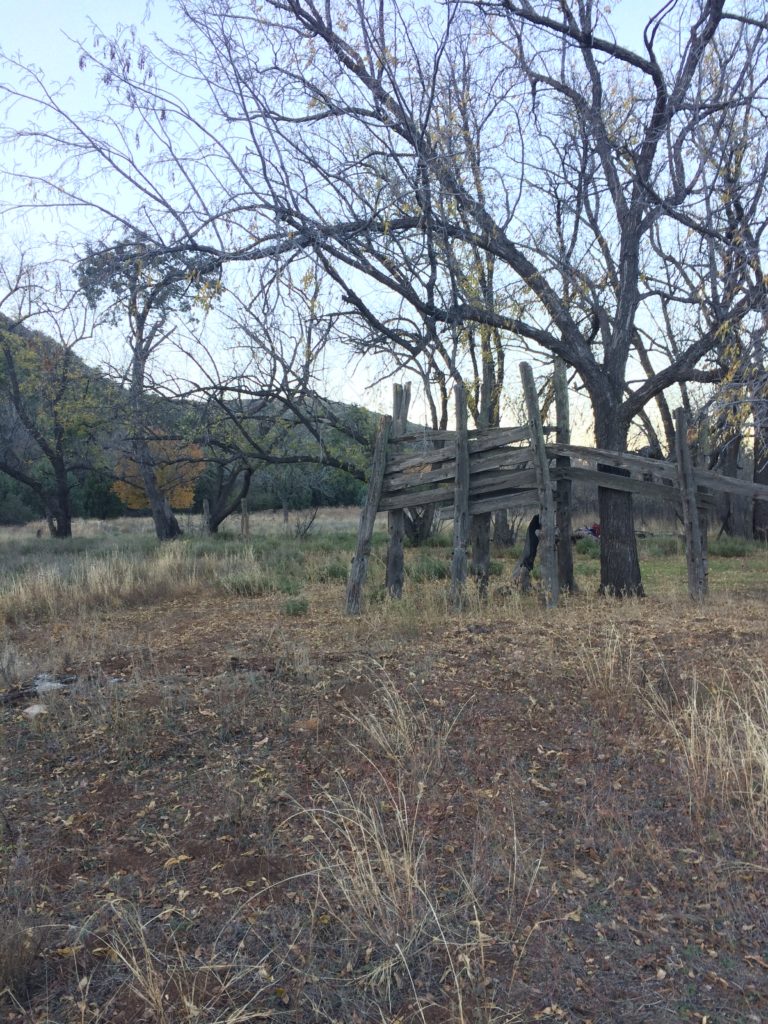 Relics from the past can be found everywhere on Reavis Ranch.

After setting up camp, we spent a couple hours exploring the remnants of Reavis ranch. The fence posts and barbed wire are still standing in some spots. The foundation is all that remains of a ranch house that stood until the 1990s, before it burned to the ground.

The land is dotted with interesting relics, from an old tilling machine half buried in the fertile soil to rusted out engine parts. There’s also an apple orchard that, according to HikeArizona.com, was planted by a man by the name of Twain Clemens, the third person to claim the ranch. 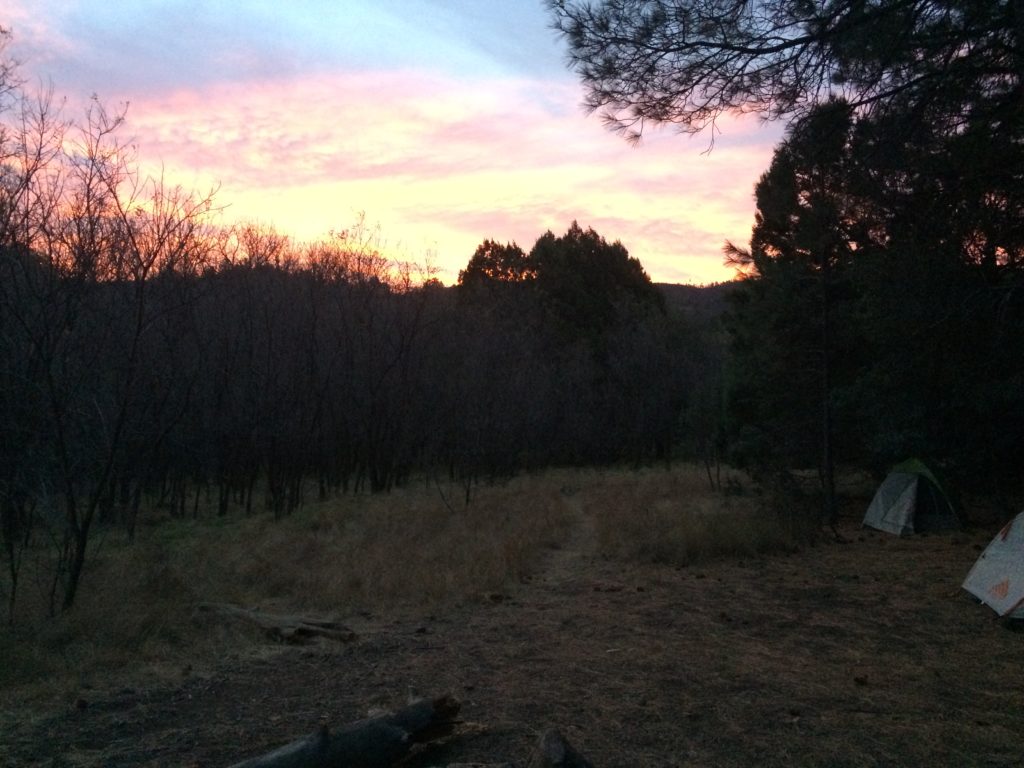 Watching the sun rise from our campsite near the ranch.

The story of Elisha Reavis is one in which history meets with a bit of speculation and lore. He’s widely believed to be the first Anglo-settler of the ranch. He grew produce and made the trek into the Phoenix and Mesa areas to sell his goods.

He died along the trail in 1896. His gravesite remains to this day, marked by a carved rock. According to the Yuma Sentinel, the body of man widely knows as “the Hermit of the Superstitions” was found half-eaten by coyotes.

While the coroner determined that Reavis died of natural causes, some believe he was actually murdered by a hitman working for the ranch’s second owner, Jack Frazer, who long sought to acquire the fertile land for himself.

Frazer sold the ranch to the Clemens Cattle Company in 1909. Today, it’s public land and part of the Superstition Wilderness.